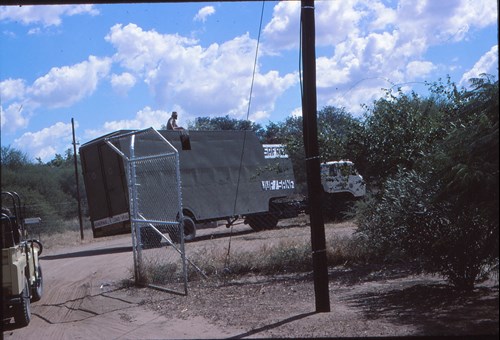 Back in 1984, The Northern Tuli Reserve was home to 48 larger mammal species. Although there were missing members of the Big Five within Tuli, what was more important was that there were no giraffe present. Ted Steyn, our visionary, regarded them as 'truly symbolic of our African wilderness'.

In Kruger National Park at that time a survey amongst visitors was conducted which found that giraffes were very high on the popularity list - they were even deemed to be more popular than some of the Big Five. This spurred the idea for Ted as he long wanted to re-introduce giraffes to Tuli. However, the translocation of any animal is a complex procedure.

Firstly, to attain a permit to re-introduce giraffes it was essential to establish both that giraffe had been present within the area and why they became locally extinct. Past data showed that they had been locally extinct for more than 100 years due to excessive hunting in the 19th century, which no longer applied in 1984.

It was also essential to show the pre-existence of giraffe in the area to allow them to thrive again. After robust historic data analysis of giraffes previously found within the area, and with the support of research and confirmation provided by Tol Pienaar, the 'competent authority' who was at the time Park Manager for the Kruger National Park, a permit was granted to re-introduce these beautiful and highly visible animals into Tuli.

After receiving permission to reintroduce giraffe to Tuli, another critical question arose of 'where do we source them from?' Andrew McKenzie, the wildlife researcher and veterinarian of the reserve, helped to locate a source of giraffes from a compatible climatic and topographical area, which in Tuli's case was Otjiwarongo in Namibia. Sixteen giraffes were ordered from different farms in Otjiwarongo and would be delivered in two lots.

The route for the translocation of the giraffes was 3600km down through Namibia into the Northern Cape through Upington, up through the Western Transvaal, Northern Transvaal and then into Tuli. In a vehicle which looked like a converted furniture van, they would be packed fairly tightly together to stop the falling over or moving excessively with sudden movements of the vehicle. There would be no chance of feeding or watering them during the trip and, as heat was the biggest threat, the vehicle had to keep moving. The translocation took place in late September, which was the very end of permitted translocation season. Many risks faced this translocation, the main two were during the journey no giraffe would have a chance to have food or water for 36 hours. Secondly, the heat was a huge threat to the survival of these giraffes.

Before travel commenced clearance was required from Namibia, the Cape Province, the Transvaal, and Botswana to move the giraffe through those territories. Further, preparations were made for the acclimatisation period at Tuli such as building a boma (enclosure) 80m in diameter and 5m high, with feeding troughs installed at 4m. Wire mesh was used to enclose the boma which had to be covered in hessian to make the giraffes aware there was a barrier to prevent them walking into wire and damaging the boma and themselves. Outside of the boma was another lower fence forming a corridor between it and the boma and three scouts were camped in the corridor 24 hours a day to raise the alarm should there be the need. In addition, fires would be kept burning throughout the night to deter predators so as not to panic the giraffes.

The boma had to be positioned in such a way to include a Mashatu tree to give the giraffes shade and as much variety of local shrubs and trees as possible to introduce them to local vegetation within their diet. Tol alerted that the risk during the acclimatisation period was that although the giraffes may take to and eat well from the new feed sources, they may lose condition and possibly even die from starvation. The reason for this is that the digestive system of ruminants is totally dependent on bacteria microbes present in their stomachs for efficient digestion of the food. Whilst the anials themselves might take to the new food source, sometimes the bacteria cannot cope with the change, even a very localised change, and this then becomes a problem. To overcome this, Tol's advice was to shoot a kudu the day before the arrival of the giraffes and put its stomach content into their water trough.....which is just what Andrew did.

So after all this preparation - was the transportation of the giraffes successful? Read about their arrival at Tuli in the next episode 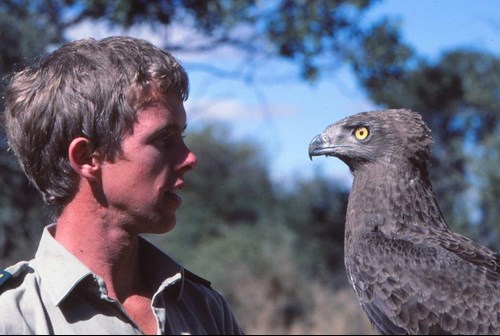 This is Andrew McKenzie with a 'Brown Snake Eagle' rescued and rehabilitated.